It is now or never! Construct buildings of immense power, draw strength from menacing magic, and prepare some of the best tower defense games for PC. Not only do you need to protect your people, but you also have to safeguard your base. No enemies must be able to cross the line; otherwise, it is over! Bravery is not enough here – you got to think and strategize critically.

Start with Swamp Attack, where you get to defend your home from crazed swap critters. There is also a battle of wits in the form of Bloons TD Battles. If you are into cult classics, Final Fantasy XV: A New Empire will not let you down. Oh, you should also never forget the Guild of Heroes – Fantasy RPG. The latter lets you team up with other players and fight evil.

Want to feel like a hero? Well, you never know – our desktop tower defense games might just be your golden ticket! Whichever title you choose to play, there is no doubt that you will have a blast. You can also check out our huge selection of Strategy Games which includes other fun games too! 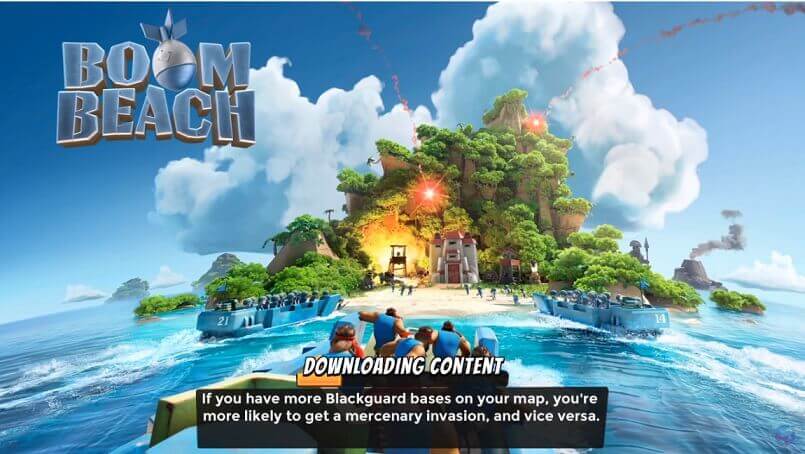 If you have been looking for a cool freemium tower defense game, then you have to check out Boom Beach. It is the kind of title that has perfectly combined the elements of a freemium game, base-building, and combat. Also developed by Supercell, Boom Beach is pretty similar to the ultra-famous Clash of Clans. This tower defense game never leaves the top 10 list of exciting unblocked balloon tower defense 5 games.

You start off on an island – or rather, beach – surrounded by a blue ocean and green trees. There’s a small area for you to erect defenses such as Sniper Towers, Mines, and Mortars using the coins that you have been given. Set these up first to protect your home base. Then, get a chance to play the hero as you troops to travel to neighboring islands to protect them from invaders! Every time you wipe out these hostile invaders, you’ll be rewarded with coins and supplies that can be used to buy more defenses or upgrades.

Don’t be bumped out by the time you need to take doing upgrades as you can pay with crystals to get them done instantly, speeding up your progress in the game. The interface of the game is really easy to get a hang of, and if you love tower defense games and building up an indestructible base, Boom Beach is just for you!

Final Fantasy XV: A New Empire – a strategy game, a war game, and an MMO game. If you have played Final Fantasy XV, this version of Final Fantasy features the same characters as well and is a game that you can definitely get a hang of quickly.

The objective of the game is to gather resources and strengthen your troops of warriors, mages, cavalries and siege machines. Build up your defenses and attack other emperors to rule over the entire realm! Here’s the catch, there is not only one realm in the game. When you have reached the late game in FFVX: A New Empire, realms can battle each other and the greatest realm of them all will emerge victoriously.

You can join guilds to earn loyalty points – this is where the social part of the game comes in. Loyalty points can be used to exchange for valuable items like weapons and barriers to protect your kingdom. It definitely sounds overwhelming – protecting your kingdom, conquering empires and attacking other realms. Indeed, this strategy game is more of a marathon than a sprint, that is if you’re planning to play the game without burning your wallet. The grinding aspect of this empire-building game is perfect for people who have time to kill and love building and strengthening kingdoms.

Zombie-like monsters, aliens, crocodiles… sounds scary, right? These creatures are attacking your home! Set traps, use weapons, and watch these mutants perish. Don’t worry though, you don’t have to do this alone as you will be accompanied by allies who can help you protect your home and survive this horrible nightmare.

Swamp Attack is a light-hearted arcade game that sets you in a relaxing way, particularly on the front porch of your swamp side cottage. This home-defense game offers vast gameplay as it has a total of 300 levels! Unlock different weapons and traps to get rid of the multiple types of monsters living in your swamp. Kill mini-bosses as the game progresses and face the vicious final boss which has multiple eyes and a very, very, disgusting body. The Swamp Attacks offers a unique gaming experience, and you’ll understand why it made our top 3 list of the best tower defense games for iOS, Android, and of course, for your PC.

It requires time and patience to complete a level as you spam your attacks, shooting and throwing destructive weapons at these weird creatures. Can you withstand the attacks and protect your homestead? Try Swamp Attack now on your PC!

Armor up and prepare for attack as you defend your homestead in the Tower Defense Games we have here!